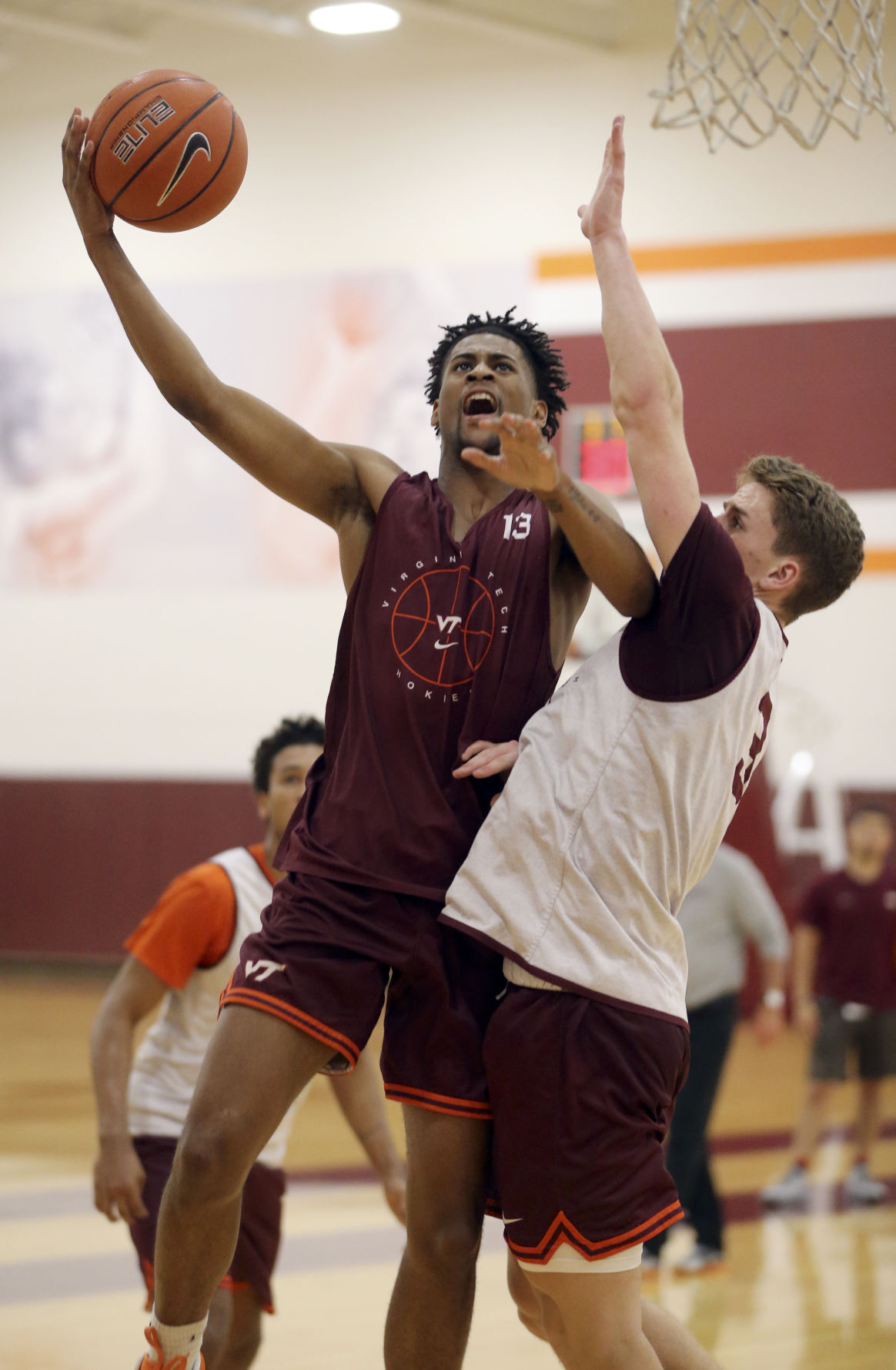 Sophomore Darius Maddox will either start or come off the bench at off guard for Virginia Tech this season. 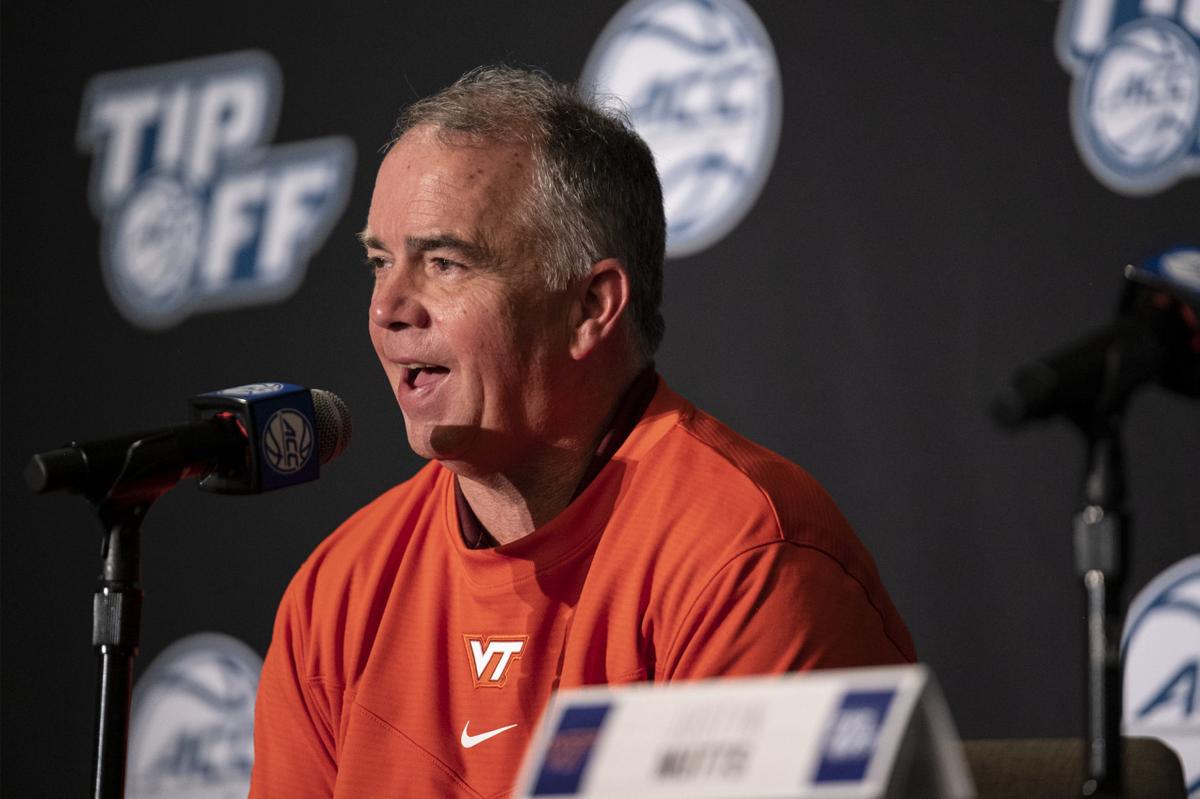 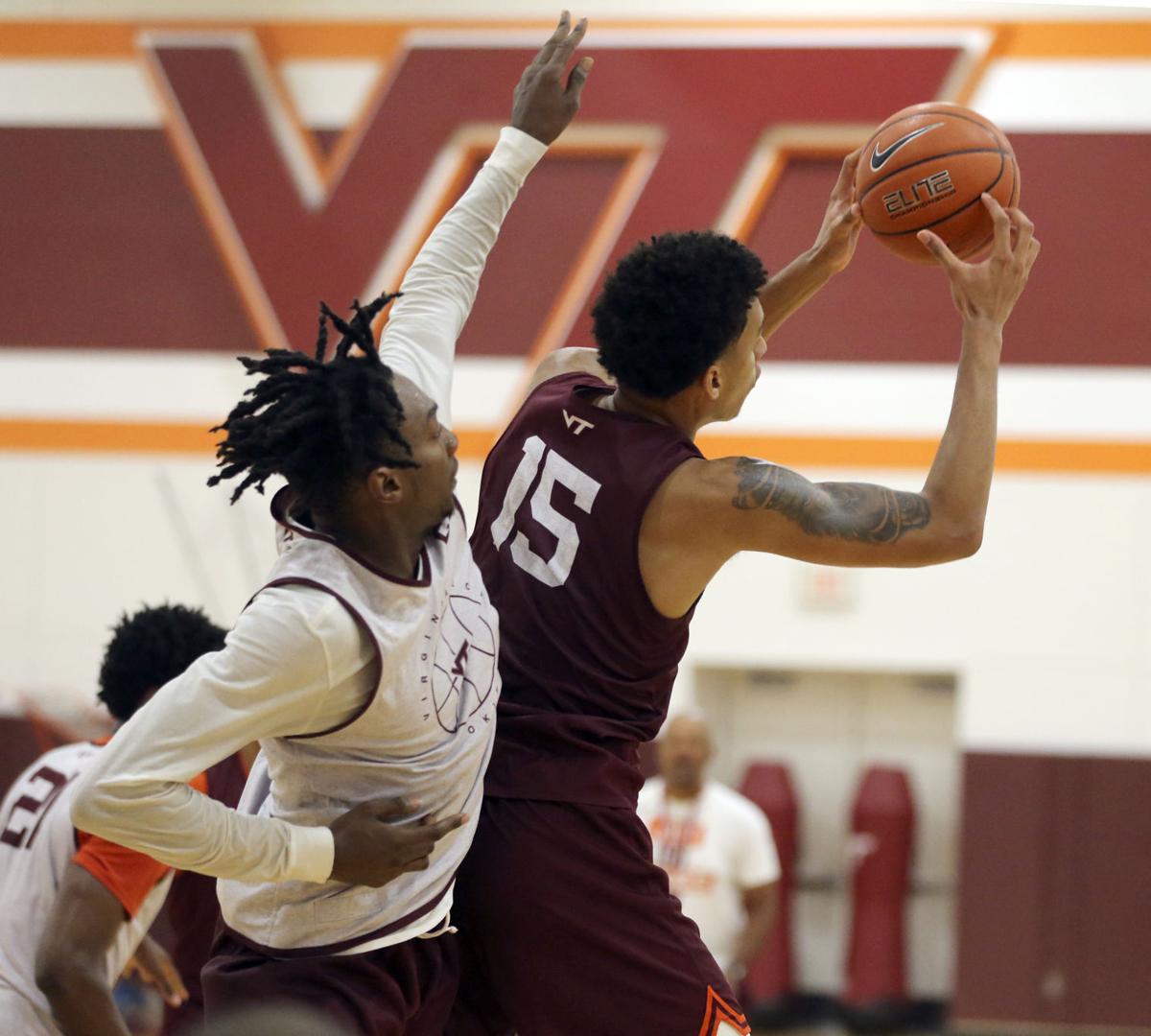 Clemson transfer Lynn Kidd (15), a 6-foot-10 backup center, catches a pass in the lane while being guarded by starting forward Justyn Mutts (25) during a Virginia Tech basketball practice this month. 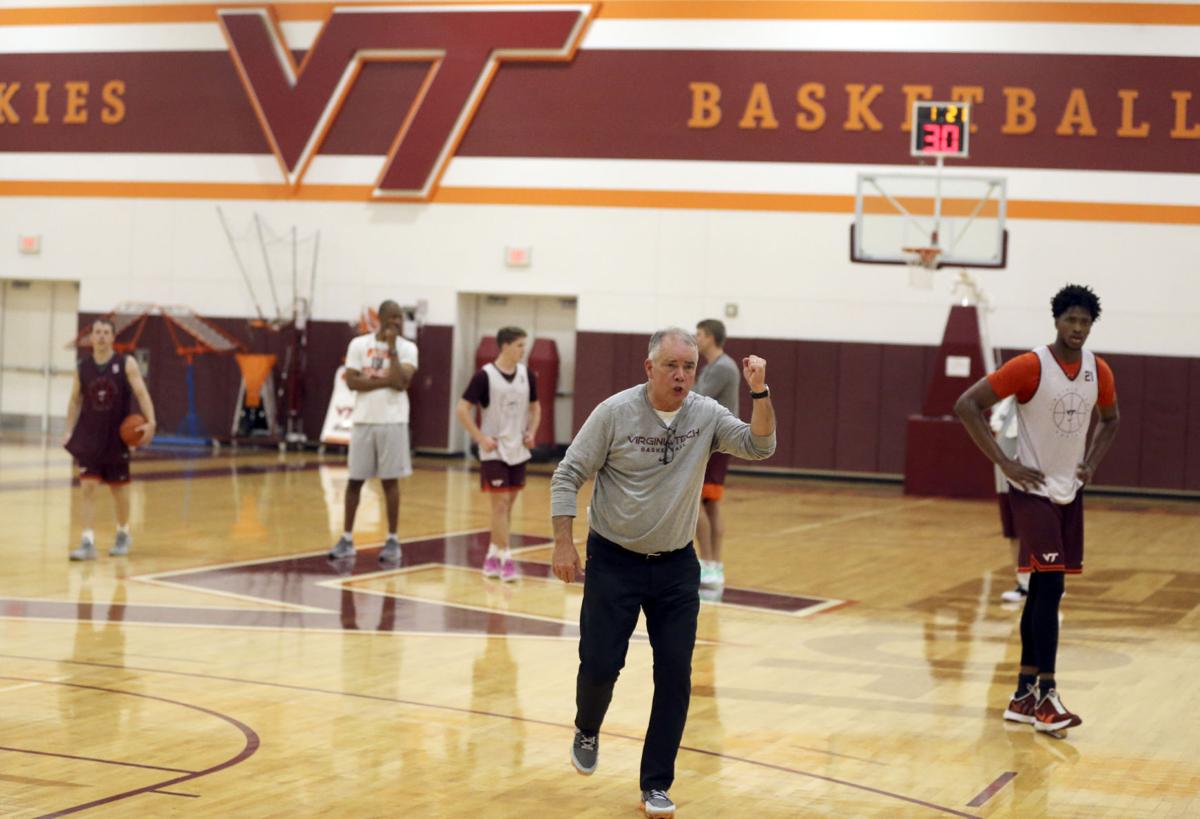 Virginia Tech men's basketball coach Mike Young, shown at practice earlier this month, would like to use nine or 10 players in his rotation. 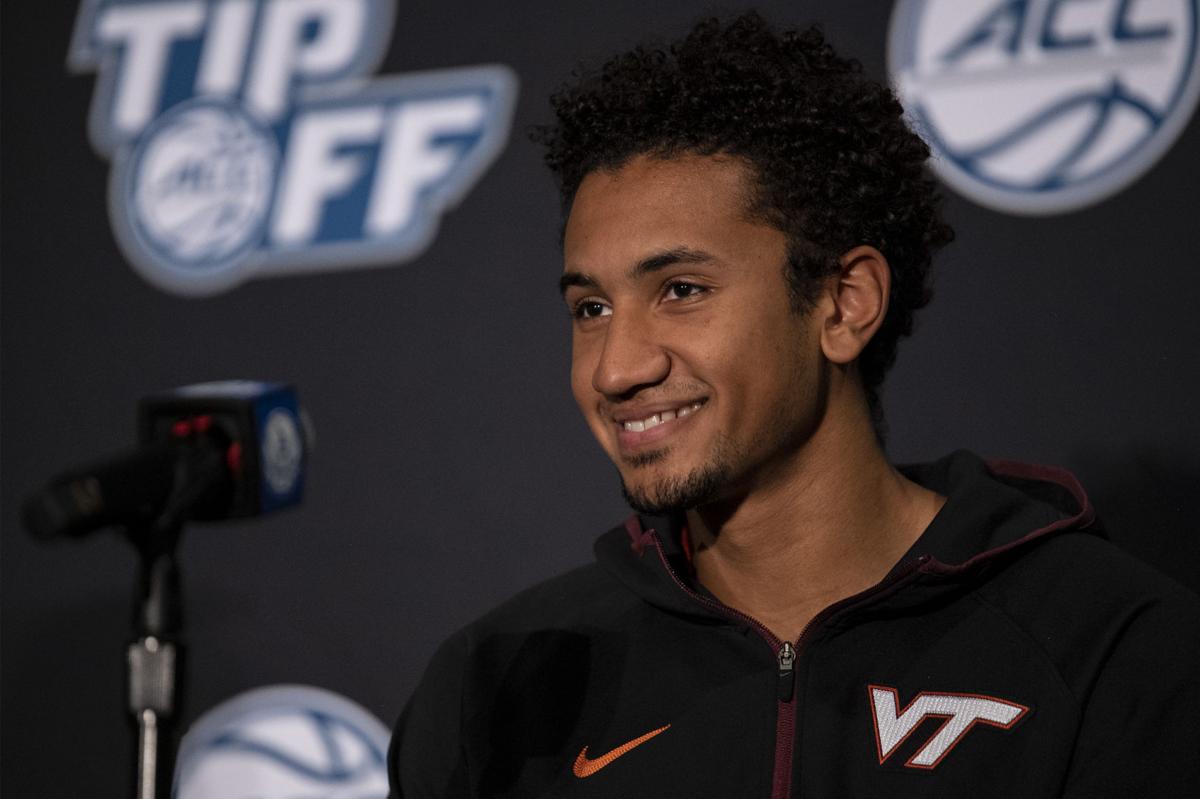 By MARK BERMAN The Roanoke Times

CHARLOTTE, N.C. — Virginia Tech will have an old team this season. But Mike Young hopes it is also a deep team.

The Virginia Tech men’s basketball coach could start three fifth-year seniors and two juniors this season. His bench won’t be as experienced, but Young would love to employ a 10-man rotation.

“I’d really like to spread those [minutes] out and distribute them,” Young said Tuesday at ACC men’s basketball media day. “I like playing a lot of guys.

Young said he would like Aluma, Mutts and Murphy to each play just 27-28 minutes per game.

“[Are there] going to be nights that Mutts and Aluma and those starters are playing 32, 33, 34 minutes a night? Maybe. Maybe. I hope not,” Young said. “I don’t like playing that way.

“I need the [nonconference] season to get John Ojiako more minutes, Sean Pedulla more minutes, others more minutes in hopes that when conference play rolls around, we have the ability to play nine, hopefully 10 [guys]. Time will tell.”

Only one starting job is still up for grabs. Junior guard Hunter Cattoor is battling Maddox, a sophomore guard, for the starting vacancy on the wing.

“He’s going to play a lot of minutes,” Young said. “I don’t think I’ll have to play him at the point [when Murphy needs rest] — and I like playing him at the point. … He’s a heck of a basketball player.

“You have no idea the number of league coaches that stopped me in July and … asked about Cattoor. Man, I love that kid’s game.”

Maddox averaged 3.2 minutes in 11 games as a freshman last season. He scored a total of 9 points.

“Maddox got caught in a numbers crunch a little bit last year,” Young said. “But he’s had a really good summer. I’ll count on him to help us win.”

“He’s pretty good at breaking his defender down and making moves like that, but also he’s a great shooter,” Aluma said.

As is the case with Maddox, Young also expects N’Guessan to be better than he was as a freshman last season.

“As sophomores, … the game does slow down for them, the lights do come on for them, as they have for N’Guessan and Darius Maddox, who struggled at times last year,” Young said.

The 6-foot-9 N’Guessan averaged 2.6 points and 9.6 minutes last season. He will not only see action off the bench at power forward this year but at small forward as well. He was 0 of 2 from 3-point range last year.

“David has really worked on his perimeter game,” Young said. “He shot one last year against Radford in our first game that wound up in the New River. And I grabbed him coming out of the locker room at halftime and I told him, ‘If you ever shoot that shot again, I’ll cause bodily harm.’

“But he’s worked, and he has made himself into a pretty darn good perimeter shooter. … David’s going to play some wing.”

Ojiako, a 6-10 backup center, played only six games as a sophomore last season because of knee surgery. He averaged 2.7 minutes.

“John’s going to play,” Young said. “I pray … he can stay healthy. … He’s playing good basketball. He’s big as a house. He’s strong. He’s been most impressive in our practices. If we were to play today, he would back up Aluma.”

Pedulla, a freshman from Oklahoma, will be the backup point guard.

“He’s looking good,” Aluma said. “I was a little surprised. … He’s going to be a great point guard.”

The bench also includes 6-10, 240-pound transfer Lynn Kidd, who played in seven games for Clemson as a freshman last season. The center played a total of 32 minutes.

“He moves well,” Clemson coach Brad Brownell said. “He put on 12 pounds at least, maybe 15, at Clemson, so he’s a big, strong guy that can finish with both hands around the rim. There aren’t that many guys like that out there, so certainly think he’ll have an opportunity to help Mike.”

NFL Week 6 Market: Will weather be a factor?

Who will win NFL Offensive Rookie of the Year?

Who will win NFL Offensive Rookie of the Year?

Kyrie Irving says he is not retiring

Kyrie Irving says he is not retiring

Teel: Hokies 'can hang our heads or continue to work' after wrenching loss to Notre Dame

The scars from Virginia Tech’s second wrenching defeat of 2021 still raw late Saturday night, Justin Fuente pondered how the Hokies might, and should, respond.

Richmond and James Madison playing at New Hampshire? William & Mary visiting Maine? How did this league come about?

The ACC commissioner said he is "really optimistic."

'It just stinks': VCU beginning to move forward from tandem of preseason injuries

'It just stinks': VCU beginning to move forward from tandem of preseason injuries

Fuente’s decision to punt deep in his own territory might not have been so controversial if Notre Dame hadn’t just driven down the field on its previous possession to tie the game 29-29.

“He’s been kind of groomed to be a quarterback."

Barber: No quit in Brennan Armstrong or UVA as Cavaliers rally past Louisville

Teel: For Duke, Krzyzewski's final season a 'mission,' not a farewell tour

Sophomore Darius Maddox will either start or come off the bench at off guard for Virginia Tech this season.

Clemson transfer Lynn Kidd (15), a 6-foot-10 backup center, catches a pass in the lane while being guarded by starting forward Justyn Mutts (25) during a Virginia Tech basketball practice this month.

Virginia Tech men's basketball coach Mike Young, shown at practice earlier this month, would like to use nine or 10 players in his rotation.