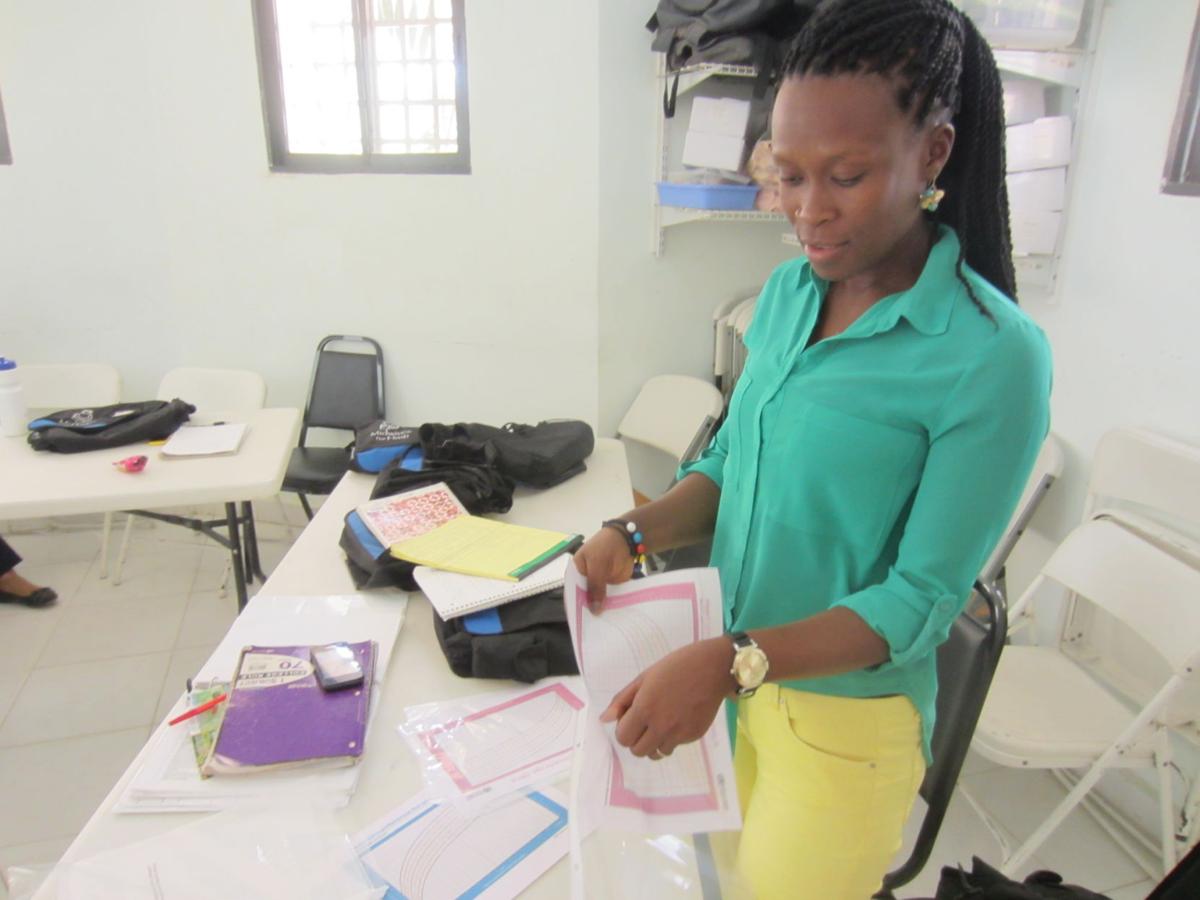 Haitian nurse-midwife Limone Clerveau of Midwives for Haiti prepares education packets that contain infant head circumference size charts. The packets are being given to Midwives for Haiti graduates, students and clinics as fears of the Zika virus, carried by mosquitoes, spreads. The virus is being investigated for a link to a birth defect that causes infants to have small heads. 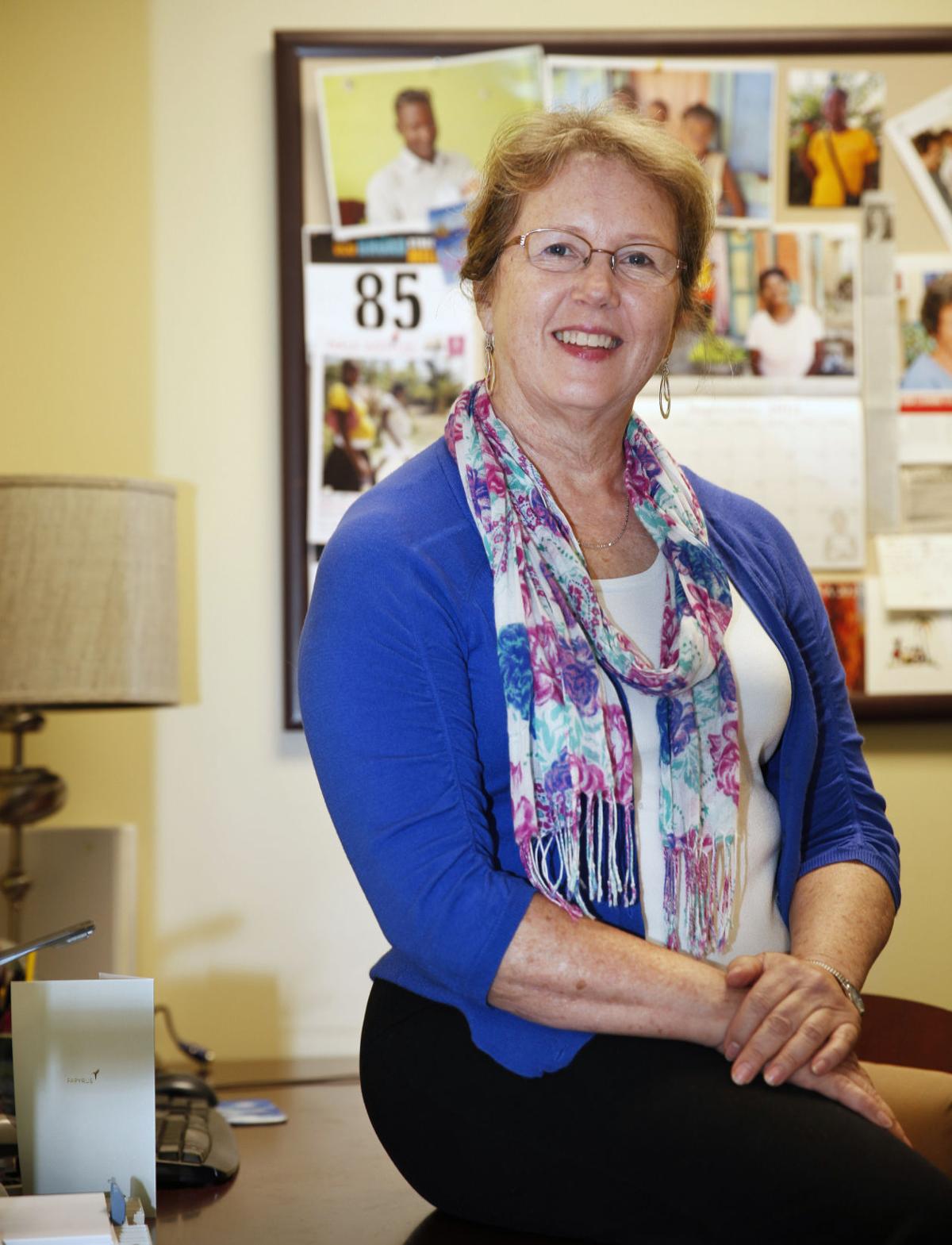 Nadene Brunk, midwife and founder of Midwives for Haiti.

As the mosquito-transmitted Zika virus continues to spread, some locally based charities that do medical mission work in Latin America are urging volunteers to follow federal recommendations and stay away if they are pregnant or thinking of becoming pregnant.

Four volunteers with Midwives for Haiti who were scheduled to go to the Caribbean country this year have canceled their plans, and more cancellations may be coming, said Nadene Brunk, co-founder of the Henrico County-based nonprofit.

The virus is spread by mosquitoes and is being investigated as causing a birth defect in which newborns have smaller-than-normal heads and brain damage. There is no vaccine to prevent infection. The World Health Organization on Monday declared the outbreak a global health emergency.

“We’ve put out information on Facebook and our website, especially about volunteers coming. If they were either trying to get pregnant or were pregnant, we really have encouraged them to cancel,” Brunk said Monday, calling from Hinche in central Haiti.

“It has definitely caused some cancellations. Then, other people who aren’t trying to get pregnant and who are past the pregnancy age, are still canceling because there seems to be some long-term effects for adults who get Zika,” said Brunk, a certified nurse-midwife.

Midwives for Haiti’s work in the Caribbean is focused on maternal health and making sure women deliver healthy babies. The charity has been doing programs in Haiti for a decade. Between 200 and 250 volunteers travel to Haiti annually, usually for two weeks at a time, to help with the organization’s programs, which include training local nurses to be skilled birth attendants.

World Pediatric Project, another Henrico-based charity that does work in the Caribbean, is talking with its volunteers — doctors, nurses and others — who go down throughout the year.

“We have 27 teams going out between now and July 1 and are definitely educating them on Zika and giving them time enough to decide if they want to drop off (a) team to give us time to replace them,” said Susan Rickman, World Pediatric Project’s chief executive officer.

“The only team members we are really concerned about are the young females who may be pregnant or considering to be. Our program areas are Central America and the Caribbean, so definitely working in the affected region.”

As the virus spreads across Latin America, travelers are bringing back cases to the United States. As of Tuesday afternoon, the Virginia Department of Health was aware of one case in Virginia, in a resident who had traveled out of the country.

On Saturday, the College of William and Mary notified the campus community that a student contracted the Zika virus while traveling in Central America over winter break. It is not known if the case is the same one reported by the Health Department. A Health Department spokeswoman said the department does not report on any cases that are still under investigation and will update its website as any additional cases are laboratory-confirmed.

Officials at the College of William and Mary, the University of Virginia and Virginia Commonwealth University said this week that no school-affiliated travel abroad trips had been canceled yet.

The mosquito transmitting the virus is of the Aedes species and is present in the United States.

“It’s a widespread mosquito. ... In theory, if this thing gets out of hand we’ll see transmission in the U.S.,” said Dr. Richard P. Wenzel, an infectious disease expert and professor emeritus at VCU.

“It’s hard to imagine that we don’t have a good chance of actually seeing that in the next year. It’s really moved through many of the islands in the Caribbean already,” he said.

Local transmission is more likely to occur in warmer months when mosquitoes are most active.

Newly infected people probably have detectable virus in their blood for about a week, Wenzel said.

“As we get more and more travelers coming back … I think all visitors should probably be told for some period of time after they return, two weeks, take precautions about mosquitoes yourself,” Wenzel said.

There is also one reported case of Zika virus being transmitted during sex, from a physician to his wife, Wenzel said. Blood donations are another issue to consider.

“So you would not want people to donate blood for at least a couple of weeks after they’ve returned from exposed areas,” he said.

On Monday, Brunk and her staff prepared information packets on the Zika virus to give the skilled birth attendants, volunteers and others. On one sheet was a chart that showed the range of normal head sizes for newborns. Additional information was on the virus and its symptoms — swollen red eyes, rash, and a low-grade fever that comes and goes. Brunk said a translator who showed up Monday to work with them had those symptoms.

“We told her she could not work with pregnant women,” said Brunk, adding that she has not heard of any cases in Haiti of newborns with microcephaly, or very small heads.

Brunk said that if Zika spreads across Haiti as it has done in Brazil, which first sounded the alarm, the implications are frightening. Last year and the year before, she and her staff were affected when two other tropical diseases — dengue fever and chikungunya — spread across the region.

“All of our staff got chikungunya in 2014. Last year all of our staff got dengue. So we’re all very concerned about the rainy season and Zika. We think that’s really when it is going to really hit Haiti. Mosquitoes are pretty scarce right now. We’re still wearing DEET (mosquito repellent). The rainy season is what brings mosquitoes on thick. There’s no way to keep everything dry when it rains for four hours between 4 p.m. and 8 p.m. every day,” Brunk said.

Second Amish buggy struck on a Virginia roadway causing the death of a woman, 2 horses and injuries to 11 people

Fearing that Richmond Public Schools employees are on the “brink of burning out — even leaving,” Superintendent Jason Kamras has announced tha…

Over 800 parents, teachers, bus drivers and other residents have signed a petition asking the Chesterfield County Public Schools system to pro…

'This is an act of vandalism and hatred': Arthur Ashe Mural in Battery Park vandalized with white supremacist tags

On the day that Robert E. Lee’s monument lost its last stand at the Virginia Supreme Court, a mural of Arthur Ashe was defaced with racist graffiti.

Living in an “incineration zone” isn’t the sort of comforting notion that would lull anyone to sleep at night.

Residents of a 10-story apartment building at 205 N. 4th St., in downtown Richmond, were evacuated Friday after city inspectors ruled it unsafe.

A Chesterfield County man has been charged with the murder of his son, Eliel Adon Weaver, who was under the age of 5 and whose remains were fo…

Man struck, killed outside of his car in apparent Henrico hit-and-run

A man died after getting out of his car and being struck in an apparent hit-and-run collision Saturday night in western Henrico County.

Haitian nurse-midwife Limone Clerveau of Midwives for Haiti prepares education packets that contain infant head circumference size charts. The packets are being given to Midwives for Haiti graduates, students and clinics as fears of the Zika virus, carried by mosquitoes, spreads. The virus is being investigated for a link to a birth defect that causes infants to have small heads.

Nadene Brunk, midwife and founder of Midwives for Haiti.